Why Our Triumph Cubs Are So Special

Classic Motorcycle Mecca has not one, but two Triumph Tiger Cubs, both very special in their own way.

Triumph introduced the T20 Tiger Cub into their sporting motorcycle range in 1953. It was an entry-level motorcycle made for everyone. The 199cc OHV, dry sump engine was derived from the 150cc Terrier and featured unit construction with the four-speed gearbox housed in a separate chamber. It was an impressive wee bike. The Cub’s styling and colour scheme matched the larger Triumph Speed Twin and Thunderbird models and its four-stroke engine distinguished it from its mainly two-stroke competitors. The styling similarities extended to the addition of a larger, ‘bathtub’ type rear mudguard. Production lasted until 1968.

It began its life when it was dispatched in August 1964 to Johnson Motors in Pasadena, California. Between 1964 and the early 2000s it became a box of parts! The box of parts was purchased and restored in Christchurch, New Zealand, during the early 2000s for an enthusiast in Blenheim. It was registered for road use in 2005. 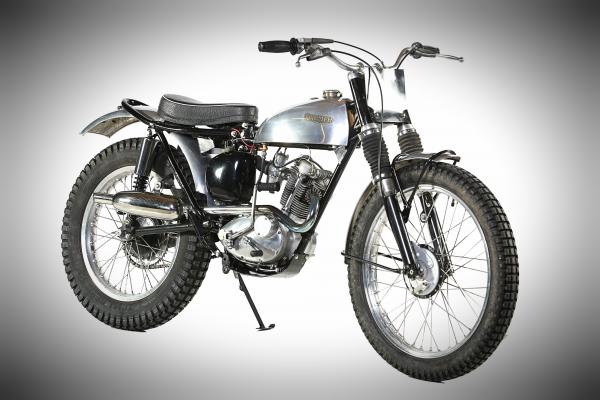 This bike is pretty special to us because it is a particularly rare one! The Tiger Cub Trials model ended in 1967, but the dealers ‘Comerford’ in Surrey purchased a batch of Mountain Cubs and converted them to works trials replica specification. Although this bike is fitted with a number of non-original components including the tank, seat and exhaust system, this example has been authenticated via UK VMC records as one of 60 produced by Comerford, only nine of which are known to have survived.