What is happening in our workshop?

This week’s post gives you an exclusive, sneak-peak at our workshop, where we restore and maintain all the vehicles in our collection. The big project at the moment is a rare 1935 Chrysler Airflow. This vehicle is not even on display yet, so you won’t get this information even from a visit to our collection (although if you are lucky you might see the talented workshop men working on it through the doors to the workshop!)

Specifically, ours is a 1935 Chrysler Imperial CW Airflow Custom LeBaron – phew! What does that really mean? 1935 is the second year of the Chrysler Airflow’s production. They were only produced between 1934 and 1937 because they ultimately didn’t sell well. There are a few theories about why – they were two expensive, too ugly (surely not!) or too un-American – but their rarity has only increased how special they are.

Chrysler is still a well-known and successful car manufacturer today. In the 1930s Chrysler was a relatively new brand which had just begun to make its mark with affordable luxury cars such as this one.

Imperial is the model name of this Chrysler series. It was first introduced in 1926 and manufactured in various forms as recently as 1993. The word imperial conveys superiority, which is what Chrysler wanted from its top-of-the-line model.

CW is the model code. It is the largest of the Chrysler Imperial Airflows, and one of the largest of any Chrysler models. It has a wheelbase of 146 ½ inches (372.11 centimetres).

Airflow is the design description. When Chrysler engineer Carl Breer designed this car he focused on aerodynamics. It resulted in a much sleeker, lower look than other cars of the era. The same design was used on DeSoto cars and Dodge trucks (we have one of each – in fact, our 1940 Dodge Airflow is on our logo).

Custom LeBaron is the custom-built body. It was built by coach builders LeBaron specifically for the Chrysler CW Airflow. As the CW is so large (they are both longer and higher than the standard Airflows) the body had to be custom-made. 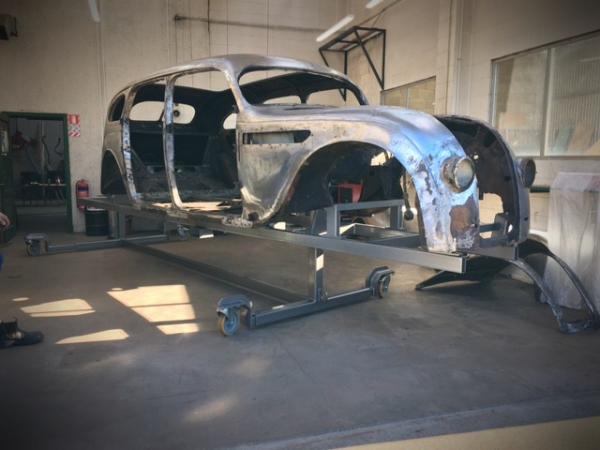 Everything about this vehicle is unique and special. It was previously owned by New Zealander Irv Black, who intended to restore it. He found it in England, where it seems to have been modified into a bit of a party limo, complete with an alcohol cabinet.

Over the next few years the workshop team are going to restore this stunning vehicle to its former 1930s glory. Bill Richardson had his eye on this vehicle before he died in 2005, so it is our pleasure to be able to restore it and display it with its family of vehicles, the Dodge Airflow and DeSoto Airflow.

I know the person who is restoring the bodywork on this car.He is a very good trademan so will make a good job of it.

Would love to be able to work in a place like this and bring my skill set here. I have always loved the projects that have been undertaken there.