Guess What the Volkswagen Beetle and Porsche 911 Have in Common?

Bill Richardson Transport World is gearing up to host a pop-up exhibit which celebrates Ferdinand Porsche’s 142nd birthday and all that he gave the automotive industry. Of course that means beautiful Porsche sports cars, which we will have on display in September. But surprisingly, it also means the Volkswagen Beetle.

The iconic Beetle was designed by the same man who started the Porsche company.

At first glance, they are poles apart. The Beetle is a compact town car that’s made for the people. Meanwhile, the Porsche is a sleek fun sports car for people with pockets that are a bit deeper than the everyday person’s.

Ferdinand Porsche, genius behind both the Beetle and the 911.

Volkswagens were designed in 1938 to meet a brief for a 'people’s car' – a compact, affordable vehicle for the people to use on the new autobahn. Ferdinand Porsche produced a strategy and design for a ‘volksauto’ and the rest is history.

If you pop into Bill Richardson Transport World’s foyer in September you will be treated to a gorgeous 1954 Volkswagen Beetle we have kindly been loaned. This is a particularly special Beetle because it was one of the first Beetles to come into the country, as 1954 was the first year that Volkswagen exported Beetles to New Zealand.

The 1954 Volkswagen Beetle in the workshop before it went on display. Visit it at Bill Richardson Transport World.

In September 1963, Porsche presented the Porsche 901 in Germany as a successor to the Porsche 356. One year later production of the model 901 began and it was renamed the 911 shortly thereafter (three-digit numbers with zero in the middle had been taken by Peugeot).

That was the beginning of one of the most iconic sports car models in history.

The 1984 Porsche 911 in storage before it goes on display at Bill Richardson Transport World.

Ferdinand Porsche was a genius who designed all manner of machines for many other companies, such as Volkswagen, but also Mercedes-Benz, Zündapp, NSU, Wanderer, Austro-Daimler, Steyr, Wanderer, Auto Union and Cistalia. He was a highly influential man in the automotive world. 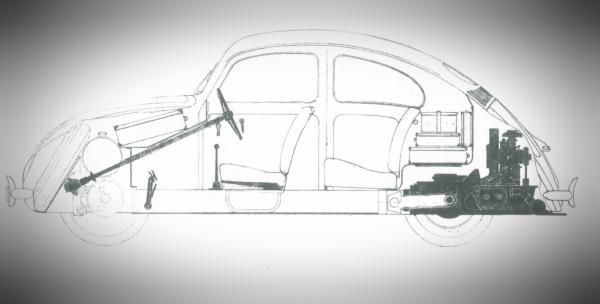 One of Porsche's diagrams for the Volkswagen showing the rear engine layout.

Ferdinand Porsche first used the unusual rear-engine, air-cooled set-up not in the Beetle, but in a Zündapp. Zündapp unfortunately pulled out of the project, but the idea had taken shape in Ferdinand Porsche’s mind. His next rear-engine influence was on a NSU car. Unfortunately it failed as well, as NSU had an agreement with Fiat that stopped it from producing cars. They obviously didn’t think of that when they began the project!

Finally Volkswagen helped Porsche produce his people’s car. The Volkswagen Beetle was born. The air-cooled engine and the rear-engine placement were both chosen to save costs without compromising performance. The result was an affordable car that could cruise on the high-speed autobahn and comfortably navigate cities. Beetles were produced all over the world until 2003, and will go down in history as one of the most iconic vehicles. Just like the Porsche 911, one of the most recognisable sports cars.

All thanks to Ferdinand Porsche.

Come and celebrate his birthday with us this September! These are a beautiful little car to drive. I went and got my license in a 1964 model 1500. It was with the Jack Croesia Driving School back in 1966. That's what he had as his learning vehicles.