Searching for a Model B Ford letter car

IT’S NOT THE HENRY FORD LETTER CAR THE TRANSPORT WORLD TEAM HAD IN MIND – BUT WE THINK ONE OF THE NEWEST ADDITIONS TO THE BILL RICHARDSON TRANSPORT WORLD COLLECTION EVOKES PLENTY OF WHIMSY. 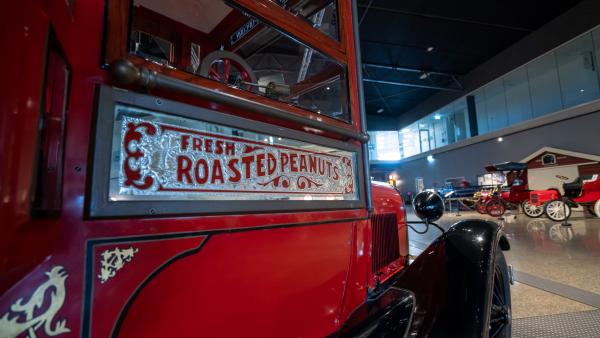 “There was a first-generation Model B Ford for sale, from a museum owned by a man who was basically the Bill Richardson of Holland – this man, Piet den Hartogh, had transport companies still run by his family today.

“In his spare time, he amassed this huge collection of antique Ford cars and Lincolns – including a Model B Ford letter car,” Williams says.

THE ONE THAT GOT AWAY – FORD MODEL B LETTER CAR

It was this Ford letter car that piqued the Transport World team’s interest.

With more than 300 vintage vehicles, Bill Richardson Transport World boasts an impressive array of classic vehicles – from retro-cool Volkswagen Kombis to trucks of almost every make and model imaginable. It is also home to an almost-complete display of Henry Ford letter cars – all that is missing is the ever-elusive model B.

Alas, it wasn’t to be. The sale of the 1905 Ford Model B side entrance Tonneau achieved a record price of €419,750 – seven times its pre-sale estimate.

“We went to the auction with a contingency plan, but the first casualty of war is the plan – so that went, and we ended up buying the popcorn truck instead,” Williams says.

Take a peep at the stunning antique Ford popcorn truck, and it is impossible to feel disappointed.

The antique Ford vehicle features details like beautiful ground bevelled glass and the stunning grains of American oak – showcasing the finest in craftmanship of an era gone by.

“It’s such an unusual vehicle. I think people will really like seeing it in our collection – it’s the style of the vehicle, the craftmanship and the materials used, the way the body’s been made … It’s a beautiful vehicle,” Williams says.

Cretors’ start came in 1893, when Charles Cretors patented a steam-powered machine that could roast 12 pounds of peanuts, 20 pounds of coffee, or pop plenty of popcorn. The success of its invention allowed the company to create the Special, a complete snack stand on wheels – one that could provide popcorn, peanuts, hot dogs and icecreams – by 1900. Originally fitted to horse-drawn wagons, the availability of cheap motor vehicles moved the mobile food court into the motoring age.

By 1928, electrically-powered popcorn poppers had replaced steam versions, but the ‘Roasty-Toasty Man’ clown turning his glass cylinder of snacks stayed on.

More than 300 lots were offered in the Netherlands as part of the den Hartogh Ford Museum closedown sale. Held on-site at the museum – just half an hour outside of Amsterdam – on 23 June 2018, the auction was the largest sale of Fords in the world.

The auction attracted interest from all over the globe, with more than 500 people registering to bid for their piece of the marque’s history. The marathon sale lasted a whopping 10 hours and was conducted by four auctioneers.

Williams says he had never experienced an auction like it.

“I’ve been to a few auctions but I’ve never been to one like that – not on that kind of grand scale. There were people everywhere – people from all over the world – and champagne was poured when things were sold,” he says.

DISCOVER THEM FOR YOURSELF

Want to see our antique Ford vehicles for yourself? Click here to buy your tickets to Bill Richardson Transport World.