Southland’s now heard many a superlative when it comes to engineer George Begg.

But to Jacqui Blake and her three sisters – Gill, Gina and Stephanie – he was simply Dad.

As much as her father’s love for motorsport was simply part of their family life in Drummond, so too are the Begg girls’ memories of long, hot summer days together; days spent in the water at Monkey Island; and her dad’s love not just of “a good cowboy movie” but all of the Disney classics – Begg was a big fan of Goofy, in particular – too. “It really was a wonderful childhood. I think that’s what we like the most about what you’ve created here: it hasn’t just looked at the motor racing side of things, it’s looked at Dad as a whole person,” she says.

One of the most significant aspects of her father’s personality? His willingness to give things a crack. It was a trait that was instilled in all of the Begg children, too.

“I don’t know, just that experience of possibilities – the spirit of, if you want to do something, just get in and do it. Give it a go, and try your best. Mum and Dad created this environment where there just weren’t any boundaries or limits. Their attitude was always that it doesn’t matter who you are or where you come from or what you have, if you worked hard and you wanted something, you could do it. Both of them really taught us that you’ve just got to have that vision, that belief in yourself, and if you had that you would be able to achieve anything,” she says.

That approach to life certainly paid off for George Begg: in the 1960s and 70s, the Southland engineer was renowned for the 18 race vehicles he built in a workshop in Drummond. The cars took on some of the biggest marques in the world – and often, came out on top.

A number of the extended Begg family travelled back to Invercargill for the city’s first-ever celebrations to George Begg, held in February.

The festivities included the official opening of the George Begg Bunker at Classic Motorcycle Mecca. The exhibition space is a whopping 1600 m2, and features the largest-ever display of race vehicles built by Begg, memorabilia from his competitive motorcycling days, his engineering business – famed for its invention of machinery such as the sheep handler – and items sourced from the Begg family themselves, including bits and pieces from his workshop (known as the ‘Toyshop’) and a vast selection of family photographs.

The opening event was attended by a large crowd: members of the public rubbed shoulders with former Begg drivers, motorsport industry figures, and media, as well as the Begg family, including George's wife Freda.

“I knew it was going to be great, but it was better than I could have ever imagined. I love the fact that all of the cars are owned by people who love them, who have got them so well-kept. The way these vehicles have been cared for, it’s part of the tribute to Dad – so it means a lot, to all of us,” Blake says.

“It does look stunning, doesn’t it, so he would have loved all of the photos and all of the cars being back together, with all of the people who were part of that journey there to celebrate with him.”

The exhibit opening was followed by the inaugural George Begg Classic Speedfest at Teretonga Park. The weekend-long celebration of retro racing was brought to the public by Transport World and the Southland Sports Car Club, and was hailed as a resounding success that featured one of the best racing fields seen at Teretonga in years. 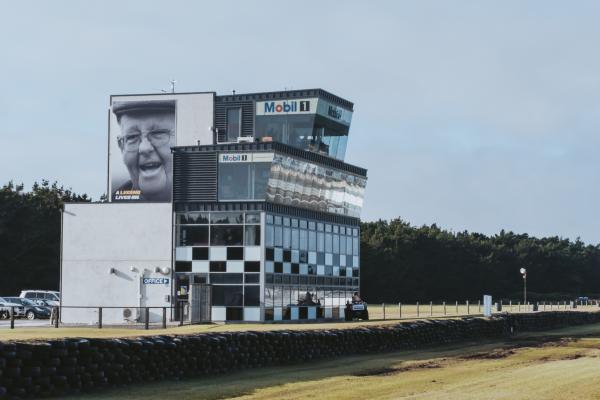 “Somebody said at the opening event, it was like a family, and that was right; that was exactly what it was like – they were all part of our family, and we all loved it. All of them, all of the drivers and the people who helped out, they really meant a lot to Dad, and so for all of this to be here in Southland now, I think he would have just thoroughly revelled in it.”