More than 50 years ago, the astounding collection that would one day become Bill Richardson Transport World was started by the man himself.

From 1967 until his death in 2005, southern transport entrepreneur Bill Richardson collected hundreds of vintage trucks, tractors, petrol pumps, and assorted odds-and-ends of transport paraphernalia. In his autobiography, Wheels & Deals, Bill wrote, "It was perhaps inevitable that I would take up truck collecting as a hobby." In fact, Bill's destiny was decided the moment his six-year-old feet touched the running boards of Snowy Kidd's 1949 Ford.

Bill Richardson made trucks an integral part of his life. As well as going on to own a number of transport businesses, he poured decades of care and passion into restoring classic trucks.

And thank goodness he did. Today, we are privileged to be able to showcase Bill's beloved vintage trucks - as well as the automotive passions of his extended family, from daughter Joc O'Donnell to grandsons Cameron and Harrison. Bill's family legacy has grown into a spectacular collection that lays claim to the title of the largest private automotive museum of its type in the world. 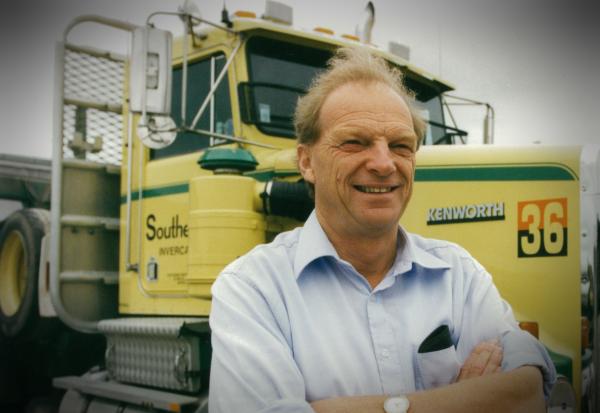 BILL'S WORDS ON THE VALUE OF OLD VEHICLES

‘Over the years designs and technologies have changed; those changes reflect better knowledge of what makes machinery more efficient and powerful. But that doesn’t render machinery whose time has passed any less valuable in my view. They’ve done what they were designed to do and, if a business has chosen wisely, done well. Those pieces of machinery also reflect history and memories.’

The first trucks he collected evoked those memories for him.

BILL'S FIRST TRUCKS AND THEIR MEANING

Although there are hundreds of trucks and other vehicles in the collection today, we thought it would be interesting to explore the memories the collection conjured for Bill.

‘In 1967 I had an urge to try to find an old International truck my grandfather had owned.'

This was the truck that started Bill Richardson's (almost) life-long quest to find, collect, and bring back to life classic trucks. Bill found his grandfather’s truck a mere two blocks from his house and paid just £5 for it. The D1 was witness to a large part of Bill’s grandfather’s life and had a lot of sentimental meaning to Bill. It was part of the business when R. Richardson Ltd moved from small-town Wyndham to the big city of Invercargill. Visitors to Bill Richardson Transport World can see Bill's 1933 International D1 in Bill's very own workshop, which remains the way he left it. 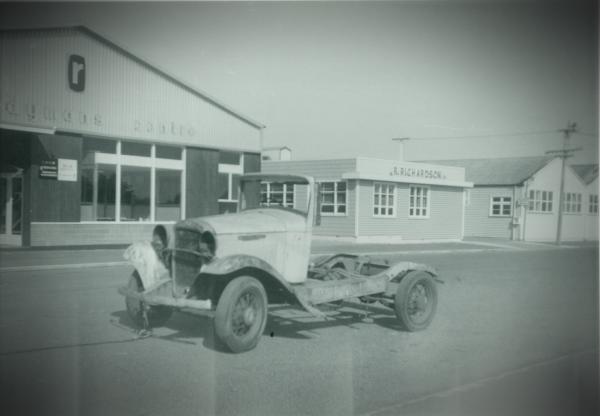 1933 International D1 outside the Richardson businesses in 1967, after Bill found and bought it

Bill’s wife Shona spotted this 1933 International D1 on the side of the road in Christchurch as it was having new spark plugs fitted. It was originally meant for spares to restore Bill’s grandfather’s truck, but it was in such great condition, Bill drove it home to Invercargill with his 17-month-old son Harold in the passenger seat! He gave this version a lick of paint and kept his grandfather’s truck (which was only one engine number before this truck) in its original condition. 1933 International D1: Bill's second vintage truck, and the second one of this model

Nine years later Bill found his grandfather’s 1938 International DS216T on the side of the road around Invercargill – but it was being turned into a trailer! He pulled over and asked the guy what he needed to do to stop that happening. The guy said all he needed was something else to make a trailer. Bill rustled something up, and the 1938 International truck was his. This truck is actually the first classic vehicle Bill and his team restored. By now, word had spread that Bill Richardson had a bit of a collection of vintage trucks. This vehicle was offered to him by George Wallis after he saw Bill's 1938 International DS216T at International Harvester’s 1977 transport conference. Bill was interested because his grandfather had a Diamond T, so he and 11-year-old Harold drove across the Haast Pass and bought it. All of these trucks had real meaning attached to them for Bill Richardson. One of the beauties about visiting our collection is that our guests inevitably find a vehicle (...or two... or ten!) that evoke similar memories or feelings within themselves. Bill was spot on when he wrote that 'those pieces of machinery also reflect history and memories'. 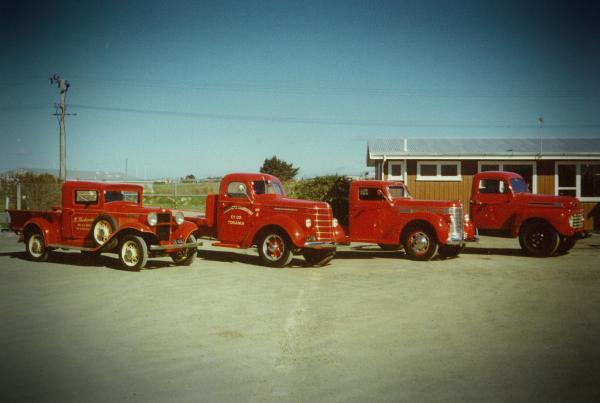 Bill Richardson's first trucks, shortly after he acquired them